Stabilized lasers are sought-after components for many applications. By using LaseLock, laser drift can be almost completely eliminated and very narrow line widths can be generated with extreme stability. LaseLock measures and detects frequency changes of the laser and provides corresponding feedback signals so that these changes can be corrected and stabilized.

In particular, optical resonators or atomic absorption or fluorescence lines serve as frequency references. These reference components are also available from TEM Messtechnik:

Conversely, it is possible to control optical resonators to a given laser frequency using mechanical actuators. The drivers required for this are optionally available for LaseLock (HV-driver for piezo actuators, HC-driver for galvos or DLD-driver for diode lasers, incl. temperature and current control).

In “lock-mode”, LaseLock stabilizes the frequency to a desired absorption peak. Input signal and user-defined thresholds are constantly compared  – the controller searchs and relocks automatically as soon as the signal exceeds the thresholds.

In this application, the frequency of a tunable laser is stabilized with the help of a reference cell. Suitable lasers can be tunable diode lasers, Ti:Sa or dye lasers, for example.

This application requires the following components:

*  We recommend to use the compact spectroscopy module CoSy →, which includes a complete setup for Doppler-free saturation absorption spectroscopy.

Two different methods can be applied:

Side-of-fringe stabilization is used when a direct discriminator signal can be derived from the measurement signal. In other words, the slope of the peak signal is used to convert frequency fluctuations of the laser into amplitude fluctuations, which can be detected and subsequentely stabilized.

For this, the laser frequency (or a different physical measure like the resonator length) is modulated, a detector signal is multiplied with the modulation signal, and then the product signal is averaged by a low pass filter. The resulting ‘lock-in’-signal represents the derivative of the signal with respect to the laser frequency (or the respective varied physical measure).

This signal can be used directly for physical examinations, because in most cases it contains less disturbing signal parts (noise, offsets) than the directly measured signal.

The zero-crossing of the derivative represents a maximum (or minimum) of the detected signal structure. For stabilization of a laser or resonator towards such an extremum, the ‘lock-in’ signal is processed by a regulator, which generates a suitable control signal that is fed back (either directly, or for piezo actuators via a high-voltage amplifier) to the frequency-determining element of the laser (or resonator). In this way the control loop is closed and the laser (or resonator) is locked actively to the maximum (or minimum). 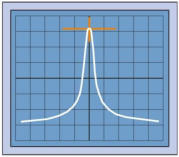 Stabilization of an optical cavity with a three-mirror image inverter

“By using a three-mirror image inverter which inverts a phase of the specific polarizing direction, we can obtain an “error signal” to lock a cavity without any transmission element […]. … It can be used successfully to lock the cavity to resonance by means of a digital-based cavity lock system (TEM Messtechnik GmbH).”

Seeding of an OPO for generation of terahertz radiation

“We present an optical parametric oscillator pumped by a single mode Q-switched nanosecond Nd:YVO4 laser for terahertz generation in periodically poled lithium niobate with a new phase matching scheme. This new method leads to an emission of terahertz radiation close to the Cherenkov angle and to a parallel propagation of the pump and signal wave. The emission frequency of this novel source is chosen by the poling period to 1.5 THz. For spectral narrowing the signal wave of the OPO is injection seeded. In the optical spectrum also cascaded processes are observed demonstrating a powerful generation of terahertz waves. The OPO itself is also seeded by a grating stabilized diode laser tunable from 1064 nm to at least 1076 nm. Therefore this seed laser is in principle useful to build OPOs for THz frequencies up to 3 THz when pumped at 1064 nm. For the purpose of cavity length stabilization we apply the Haensch-Couillaud stabilization scheme and a commercially available locking system.”

“High-resolution spectroscopy is a versatile tool to study planetary atmospheres. […] The paper will present a detailed description of the Cologne-based receiver THIS, the only tuneable heterodyne infrared spectrometer for application to astronomy offering access to the 7–17 mm wavelength region at a resolution of up to 3 107 and a bandwidth of 3 GHz.

To optimize the superposition of the signal and the laser and to provide a relative frequency standard a confocal FP ring resonator is used, the so-called diplexer. The diplexer consists of two focusing mirrors (focal length 30 mm) and two highly reflective beam splitters […] The locking process is performed in two steps: first, a stabilized Helium–Neon (HeNe) laser operating at 632 nm […] is fed into the diplexer […] . An error signal is provided by a lock-in amplifier which can then be used to actively control the diplexer resonances via the piezo actuator.

In a second step the transmission of the QCL through the diplexer is monitored via the DC component of the heterodyne detector. A second lock-in/feedback circuit is then used to keep the QCL emission at the maximum of the diplexer transmission curve. Following this procedure the LO can be stabilized in frequency to 1MHz RMS (see Section 2.3). […] The stabilization feedback loop consists of two LaseLock units manufactured by TEM Messtechnik.”

Injection-locking of a Ti:Sapphire laser for resonance ionization

University of Jyväskylä, Finnland, 2013:
Injection-locking of a Ti:Sapphire laser for resonance ionization →

[…] With this setup it was possible to stabilise to the Rydberg states […]. In principle all states between these will also be accessible. However, for higher n, the lower SNR of the signals prevented a reliable third step lock. The only limiting factor was the available third step laser power.

The results from this study suggest that the absolute frequencies of Rydberg levels could be measured to an accuracy of <100 kHz using this locking technique. This far surpasses the accuracy of the work in Chapter 4, and would give an accuracy comparable to relative microwave spectroscopy measurements.”

8 % surcharge for non-European countries plus shipment and possible import duties/taxes in the destination country.